Young Methodists struggle with embarrassment about their faith 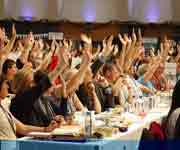 A report to the Methodist Conference has revealed that young members of the Methodist Church struggle with feelings of embarrassment about their Christian faith. It is holding its annual Conference in Plymouth this week.
A report to the Conference said that 09 to 13 year olds in particular are coping with bullying and feel embarrassed about being Christian. Other areas of concern for young Methodists include poverty, dating non-Christians, sexuality and ethical living. The report spoke of the desire among younger Methodists for the Church to be a place where they can go with their worries.

Feedback from 14 to 17 year olds who attended the 3 Generate Children’s and Youth Assembly in Cleobury Mortimer last year revealed a keen interest in discussing the gender imbalance in churches, and the need to create a safe space in churches to talk about sex, climate change, violence and injustice. The report was presented to the Conference by Methodist Youth President Sam Taylor, who encouraged more young Methodists to get involved in the Church's youth branch, 3Generate.

“The voice of young people in the Methodist Church is growing and we need to have the skills and knowledge in place to make that voice effective in challenging and changing the Church," he said. "We want to see more and more young people becoming part of 3Generate and we want the Church to keep communicating that 3Generate is one of the best ways to do it. "3Generate is a good model of participation because we get children and young people involved in planning and initiating it and that makes them feel empowered as part of a church community.” CHRISTIANTODAY
More Latest Missionaries News Updates Click Here!!!
Latest Christian News Updates