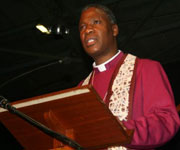 The Archbishop of Cape Town, Thabo Makgoba has condemned the deaths of 34 people at a mine in South Africa. Police opened fire on miners during a strike at the Marikana mine in the North-east of the country. According to the BBC, at least 78 people were injured in the confrontation. The miners had been striking for more than a week over pay at the Lonmin-owned platinum mine. Prior to Thursday's clashes, 10 people had already been killed in violence surrounding the strike.

Archbishop Thabo Makgoba called for "strong, but measured and proportionate" intervention to end the "senseless loss of life". "Like so many South Africans, I have been watching with growing alarm the escalating violence at Lonmin's Marikana Mine over the last week, and am now stunned and appalled by yesterday's events which left so many more dead or injured," he said. "It is a terrible, heart-breaking, tragedy, for the individuals concerned and for our nation. Our fervent prayers are with all the bereaved, and the hurt and wounded.


"Whatever the merits of the various disputes – whether between employees and employers, between unions, between workers and union leaders, between miners and police – whatever the legality of the strikes or the responses to them, this death toll is unacceptable. "Even one death is one too many, and there must be an end to this senseless loss of life." He added: "Sincere, mature, negotiation must always be the route to solving our differences. Violence is never the answer.