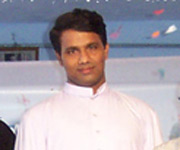 Police in Karnataka yesterday took into custody a Catholic priest Fr. Vincent of Puttur Syro-Malankara Diocese for allegedly insulting the Indian flag on the country's Independence Day. He unfurled the flag on a pole with a cross atop at the Bishop's residence at Parladka in Puttur. Since Bishop Gee Varghese Mar Divannasios was away, Fr.Vincent, Assistant Pastor of the Cathedral Parish, decided to hoist the flag.

Fr. Vincent of Puttur Syro-Malankara Diocese also allegedly used a clothesline to hoist the flag, which violated the provisions of the Prevention of Insults to National Honour Act, 1971. Ulle Gowda, Tehsildar of Puttur, said the police took the priest into custody to avoid any untoward incident after a mob gathered outside the bishop's residence to protest the "insult" to the national flag. They protested the national flag fluttering under a cross.


Gowda said the police did not file a case against the priest since the law does not specify how the flag should be hoisted in a private place. He said they have asked their higher officials to clarify the matter. The law prohibits desecration of the country's national symbols such as the flag, Constitution and anthem or insult to them. The police later released the priest.