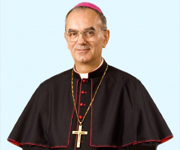 The Catholic Church's Vicariate of Northern Arabia will move its headquarters from Kuwait to Bahrain, saying the country's location is more accessible for meetings. Apostolic Vicar Bishop Camillo Ballin expressed his "heartfelt gratitude" to King Hamad Bin Isa Al Khalifa of Bahrain and the ruling family for their "magnanimous gesture of goodwill to the Catholic community of Bahrain," the bishop's office said in an Aug. 9 statement.

The king and royal family have granted 9,000 square meters of land, which will be used to build a larger church in Awali to Catholic Church's Vicariate of Northern Arabia and to host the vicariate's apostolic headquarters. The vicariate is a form of territorial jurisdiction of the Roman Catholic Church established in missionary regions and countries. There are over two million Roman Catholics in the vicariate, which encompasses Kuwait, Bahrain, Qatar and Saudi Arabia. The Kingdom of Bahrain said Aug. 7 that it will host the vicariate "as a testament to the Kingdom's religious and cultural openness." The move comes after several threats to Christians' religious freedom in the region.


Kuwaiti Member of Parliament Osama Al-Munawer announced his plans to submit a bill calling for the removal of all churches in Kuwait, according to the Kuwait Times. After facing criticism, he later said that existing churches should remain, but he advocated a ban on the construction of any new non-Islamic places of worship. In March, the Grand Mufti of Saudi Arabia Sheikh Abdul Aziz Bin Abdullah reportedly said it is "necessary to destroy all the churches of the region" in accord with an ancient rule that only Islam may be practiced there. Source: CNA