CBCI Delegation meets on the President of India 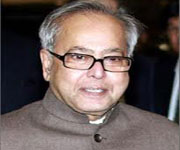 The Catholic Bishops' Conference of India's delegation, led by its President His Eminence Cardinal Oswald Gracias met on Shri Pranab Mukherjee, the new President of India at Rashtrapati Bhavan on Monday. His Grace Archbishop Albert D'Souza, the Secretary General and Fr.Joseph Chinnayyan, the Deputy Secretary General were also present. His Eminence Cardinal Oswald Gracias has felicitated the Honourable President and conveyed the prayerful greetings and best wishes of the Catholic Community of India. The Cardinal has assured the Honourable President that the Catholic Community will continue to work for peace, prosperity and harmony of our great nation as in the past.

The Hon'ble President from his part said that he appreciated very much this gesture of good-will from the part of the Catholic Church. The President also observed that Christianity from its very beginning had strong roots in India. Shri Pranab Mukherjee expressed his deep esteem for the great service the Church is rendering to the nation in the field of education and health care. He was very appreciative of the work that has been done in rural areas of India.


Cardinal Oswald Gracias told the President that the Church is really concerned about the harmony and peace among various religions in India. Cardinal Oswald and Archbishop Albert D'Souza assured the President of the prayers for the health and well-being of the President and wished that God may abundantly bless him in his noble task of leading and guiding the largest democracy in the world with his proven statesmanship, respect for values and his uncompromising attitude towards upholding the cherished ethos of our nation and the principles of peace and tolerance. Source: CBCI News