Ignatius Kaigama appeals for help to protect Nigeria from extremists 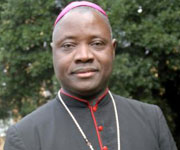 Archbishop, Ignatius Kaigama, Chairman of Nigerian Bishop's Conference has called on the international community to protect the religious freedom of Christians in Nigeria, warning that extremists of the Boko Haram sect threaten the country's existence. "Pressure your governments, do not abandon us because otherwise Nigeria will be destroyed," said Archbishop Ignatius Kaigama. He made his remarks during the Aug. 19 -25 gathering of hundreds of thousands of people worldwide in Rimini, Italy by the lay ecclesial movement Communion and Liberation.

In Archbishop's address to the conference, entitled "The Martyrdom of Nigeria, We need a miracle from God," He denounced the violence of the Islamic extremist Boko Haram sect, including its attacks on Catholics who are attending Mass. In his own Archdiocese of Jog, he said, violence by such extremists have left more than 800 people dead. "There needs to be a response from the international community and efforts need to be focused on ensuring the religious freedom of Nigerians," he underscored.


Archbishop Kaigama noted that desperate young Christians come to the Church looking for financial assistance "to by weapons in order to avenge and combat the Muslims. But I tell them I am not a warrior. My role is to promote peace." However, he added, peace is also threatened by the lack of resources, such as water, health care and public services. "I travel through the villages and I sort of feel like a social worker while government officials sit in their air-conditioned offices," he said.