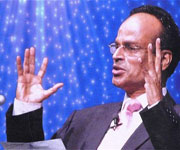 Peramangalam Porinju Job, an Indian preacher, often referred to as Billy Graham of India, died of heart attack Sunday in Hungary where he had gone on a preaching mission. His age was 76 and he began working as an evangelist in1963, especially among the persecuted Christians in communist and Muslim countries.The UK-based International Biographical Centre, Cambridge, nominated Job as "International Man of the Year" for 2000 – 2001.Job was the president of International Christian Association founded by Rev. Richard Wurmbrand, a Romanian evangelist who opposed communism. The Indian preacher joined the organization that works for persecuted Christians the world over 33 years ago.

His preaching mission had taken him to 129 countries. Millions have read his books "With a dynamic Man of God," "Fifth Gospel" and "Why God Why." He also set up a printing press that publishes 3 million pieces of Christian literature annually in 37 languages.


Third of a veterinary doctor's four sons, Job left his native Kerala state after matriculation to join the Union Biblical Seminary in Pune, Maharashtra. He began his preaching mission after securing doctorate degrees in philosophy and theology. He had set up several institutions, including the Michael Job Centre, an orphanage.