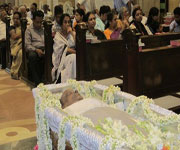 Around hundreds of people attended a funeral service yesterday for a renowned preacher P P Job who was often referred to as the Billy Graham of India. Peramangalam Porinju Job died due to heart attack on August 19, 2012 in Hungary. He was 67 years old. The body of the inveterate traveler, who visited 129 countries in his 49-year mission, was brought to New Delhi on Saturday. He was a "courageous evangelist who started small, dreamed big and made things happen," said Marthoma Metropolitan Joseph Mar Thoma, who led the service at the city's Church of Redemption. Job was the President of the International Christian Association, an organization that works for persecuted Christians.

Peramangalam Porinju Job championed the cause of minority believers especially in Muslim and communist countries. As well as opening an orphanage, P P Job also set up a printing press that now publishes three million items of Christian literature annually, in 37 languages. They are distributed worldwide, including in countries that ban such material. Rev. Jacob Thomas, representing the bereaved family, said Job was always compassionate toward the disadvantaged and the downtrodden. "He had controversies throughout his life but he had the integrity and honesty to say he was simply a humble servant of God," he said.


His mention of controversies may have been a reference to a failed attempt on Job's life by suspected Hindu radicals in 1999. The same group is suspected of killing his 21-year-old son Michael by running him down with a car. After the funeral service, Job's body was flown to Coimbatore in Tamil Nadu state, to help his loved ones pay their last respects.