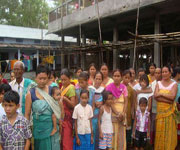 A team of the National Council of Churches in India (NCCI) visited the trouble torn areas of lower Assam on a peace and solidarity mission. The team had visited the relief camps of both Bodos and Bengali speaking settlers. More than 85 people have died and around 400,000 have been forced to flee their homes to displacement camps after clashes between the communities. The team consisted the leaders from the North East India Christian Council (NEICC), Presbyterian Church of India (PCI), Council of Baptist Churches in India (CBCNEI), Young Women's Christian Association (YWCA), Joint Peace Mission Team (JPMT) and Inter-Church Peace Mission (ICPM).

"The condition of the relief camps is very pathetic even though basic rations, shelter and health care are provided by the Government. It is but inevitable that there has been and continues to be a struggle among the different people groups for ownership of land, for protecting their respective identities and cultures and for political and economic control over the region," the NCCI team noted.


While people are beginning to return home from the relief camps, they said the reality is that most of them are afraid that when they return they would be subject to attacks in future. "Living with this lurking fear, they are faced with the big challenge of reconstructing their houses and re-establishing their means of livelihood. Therefore efforts have to be taken to provide security for the people to return to their homes and reconstruct their lives," the team led by Solomon Rongpi, the Executive Secretary for Unity, Mission & Evangelism, said.


The NCCI leaders also met the Chief Minister of Assam, Tarun Gogoi in the evening of August 21 at his residence. Gogoi appreciated the church's involvement in the relief and rehabilitation works. He further requested and welcomed the church to be part of the peace building process. Expressing deep concern for and solidarity with the victims of violence, the NCCI said it is willing to partner with the Government and other agencies in relief services, rehabilitation, reconciliation and peace building endeavours.


The Assam violence is reported to be the worst communal clashes India has witnessed since February 2002 when Hindu-Muslim riots in Gujarat claimed over 2,000 lives. Prime Minister Manmohan Singh visited the affected areas on July 28 and announced a package of Rs 300 crore for the relief and rehabilitation of survivors. Meanwhile, taking action against social networking sites and portals inciting hate and panic, the Government this week ordered the blocking of around 300 web pages with objectionable content and banned bulk text messages after a mass exodus of Northeast Indians from metro cities across the country.