Bible Does Not Condemn Homosexuality. Is it true? 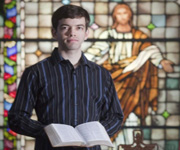 Matthew Vines is a 22-year-old gay Christian who believes being gay is not a sin. He came to that conclusion after two years of studying Scripture and the works of dozens of biblical scholars. The Harvard University student, currently on leave of absence, is now trying to win over fellow believers not just with an emotional testimony but with what he is presenting as biblically solid arguments. There is no contradiction between being Christian and being gay," he told BBC.

His arguments – mainly against six Bible passages that are commonly used by Christians to condemn homosexuality, are gaining popularity as evidenced by his YouTube views. In six months, an over hour-long video of Vines meticulously challenging what he calls the traditional interpretation of Scripture has garnered nearly 400,000 views. In an interview with The Christian Post, Vines made it clear that he believes that Christians who believe homosexuality is a sin are wrong. "Loving, same-sex relationships" are not addressed in the Bible, let alone condemned, he argued.


He distinguishes between lustful, casual homosexual behavior and loving, "natural" same-sex relationships, arguing that it is only the former behavior that the Bible speaks against.