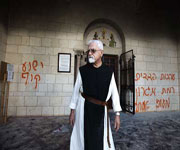 The Catholic Church in England and Wales has condemned the vandalism of the Latrun Monastery, close to Jerusalem on Monday night (03.09.2012). The monastery was established in 1890, and its vineyard and winery produce a wide variety of wines. The door of the Cistercian monastery was set alight in the early hours of Tuesday and anti-Christian graffiti endorsing the Israeli settlement of the Palestinian Territories was sprayed on its walls. During the vandalism, a wooden door to the impressive monastery sustained damage after having been set on fire. Among the slogans were, "Jesus is a monkey" and "Migron."

Bishop Declan Lang, Chairman of the Catholic Church's International Affairs Department, warned of "rising intolerance" in Israel. He said the vandalism of the monastery was the latest example of a "disturbing pattern in which Christian and Muslim sites are being targeted by extremists or settlers within Israeli society". "We deplore this latest act since we firmly believe that it stands in stark contrast to the views of most Israelis," he said.


The vandalism was also condemned by the Assembly of Catholic Ordinaries in the Holy Land. In a statement, it condemned attacks against Christians and their places of worship. The Israeli authorities were urged to put an end to the "senseless" violence and to ensure a "teaching of respect" in schools. "What is going on in Israeli society today that permits Christians to be scapegoat and targeted by these acts of violence?" the statement read. "Those who sprayed their hateful slogans, expressed their anger at the dismantlement of the illegal Jewish settlements in the West Bank.


"But why do they vent this anger against Christians and Christian places of worship? What kind of 'teaching of contempt' for Christians is being communicated in their schools and in their homes? And why are the culprits not found and brought to justice?" Bishop Lang echoed the call of the Assembly to the Israeli authorities to deal with the perpetrators and attitudes of intolerance. The monastery is a religious community protected by France under the Chauvel-Fischer agreements with Israel.


The French Ministry of Foreign Affairs said its Consul General in Jerusalem visited the monastery following the incident. "France strongly condemns this act of vandalism directed at a place of worship and peace," the ministry said in a statement. "It expresses its wholehearted solidarity with the community of monks. "France calls on the Israeli authorities to shed full light on these serious acts and to bring those responsible to justice."