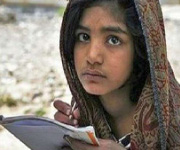 Rimsha Masih, the Christian girl accused of blasphemy in Pakistan, has been granted bail. According to reports, Judge Muhammad Azam Khan has ordered her release and set bail at 5,00,000 rupees (around £3,300). He also ordered that she be placed under protective custody out of concern for her safety. Rimsha was placed in a maximum security prison three weeks ago after neighbours accused her of burning papers with Koranic writings on them. Her principal accuser, Imam Khalid Chishti, was arrested last week on suspicion of planting evidence against Rimsha.

Blasphemy is a crime punishable by death in Pakistan but Christians and other minorities say the laws are being misused to settle personal scores. The accusation against Rimsha caused her whole family to be taken into police custody and hundreds of Christians reportedly fled the area.


The Centre for Legal Aid, Assistance and Settlement (CLAAS), which provides free legal aid to persecuted Christians in Pakistan, welcomed the release of Rimsha but remains concerned for her safety and the welfare of the wider Christian community. It wants to see the Pakistani government take action to stop more unfounded blasphemy charges made against the country's minorities.


Nasir Saeed, CLAAS UK Coordinator commented: "The charge of blasphemy against Rimsha Masih was based on false evidence and this is not an uncommon occurrence in Pakistan. Sadly the blaspemy laws are frequently misused to stir up animosity and hatred towards Christians and even to take their land or property.


"I am very happy for my daughter's liberation," said Misrek Masih, Rimsha's father. "I am grateful from the bottom of my heart" for what the Catholic activists from the All Pakistan Minorities Alliance (APMA) and Minister Paul Bhatti who is also chairman of the APMA did, "working tirelessly for her release." The mentally disabled girl was arrested in mid-August on blasphemy charges stemming from allegations that she had desecrated pages of the Qur'an.


This morning an Islamabad court ordered her release on bail after reports surfaced that an imam had fabricated accusations against her in order to ignite hostilities against the local Christian community and take over their property. After days of tensions and fear, the girl's family can prepare to celebrate her release and welcome her home.