Christians and Muslims must stand against violence 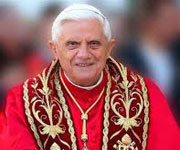 Pope Benedict XVI has called for negotiation and collaboration between Christians and Muslims. Speaking at his general audience at the Vatican today, the Pope reflected upon his visit to Lebanon at the weekend, where he met members of both faith communities. He paid tribute to the cohabitation and collaboration between faith communities in Lebanon, saying it was "emblematic for the region". The "mutual respect, understanding and fraternity" displayed in his meeting with Muslim representatives "constitutes a powerful sign of hope for all mankind", he said.

He also stated that the Muslims welcomed me with great respect and sincere consideration and their constant affable presence gave me the opportunity to launch a message of dialogue and collaboration between Christianity and Islam. "I believe the time has come to bear sincere and definitive witness together against division, violence and war" added Pope Benedict XVI. He spoke of his concern over the "terrible" conflict waging in Syria, which has prompted a flow of refugees into Lebanon. "Sincere" dialogue to resolve cultural, social and religious differences was necessary to ensure a future of peace and solidarity, he continued.


"The world today needs clear unequivocal signs of dialogue and collaboration, something of which Lebanon has been and must continue to be an example, for the Arab States and for the rest of the world," he said. "Seeing young Christians and Muslims celebrate in great harmony, I encouraged them to build the future of Lebanon and the Middle East together, and to oppose violence and war. Harmony and reconciliation must be stronger than the forces of death" said Pope Benedict XVI.