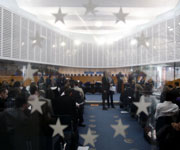 Four British Christians are in Strasbourg today to press for the right to live according to their faith in the workplace. The European Court of Human Rights is today hearing the cases of Nurse Shirley Chaplin, airline worker Nadia Eweida, registrar Lilian Ladele and relationships counsellor Gary McFarlane. Mrs Chaplin and Mr McFarlane are being supported in their cases by the Christian Legal Centre (CLC). CLC Director, Andrea Minichiello Williams accused the Government of "astonishing double-standards" in their handling of the case.

Mrs Chaplin was removed from frontline ward duties to a desk job by Royal Devon and Exeter NHS Trust Hospital for failing to remove a small cross necklace. Ms Eweida was sent home by British Airways when she also refused to remove her cross necklace. British Airways contended that the item went against its uniform policy. Ms Ladele was disciplined by Islington Council in London after she refused to conduct same-sex civil partnership ceremonies. Mr McFarlane was sacked by the Relate counselling group after he said he would not be able to provide sex therapy to same-sex couples because of his religious beliefs.


CLC Director, Andrea Minichiello Williams, accused the Government of "astonishing double-standards" in their handling of the case. In particular, she hit out at David Cameron who has looked to churches to help get his 'Big Society' project off the ground and made public statements in support of Christians, whilst refusing to intervene in the four cases. The Government's submission in relation to the four cases stated that "there was no interference with the applicants' right to manifest their religious beliefs" and that the applicants were "free to resign if they consider that the requirements of the employment are incompatible with their religious beliefs".


Ms Minichiello Williams said: "Gary and Shirley have received massive support from the British public who believe that the 'equality agenda' has led to injustice". "Many believe it is unfair that hard-working public servants and employees are being discriminated against simply because of their faith. It is very clear at the moment that there is either a major problem in the way that the Equality Act was drafted, and/or the way in which the Courts, and employers, fail to balance the rights of various groups and beliefs. It is time for this to be redressed.


"The working of the British courts has led to deep injustice. If we are successful in Strasbourg I hope that the Equality Act and other diversity legislation will be overhauled, so that Christians are free to work and act in accordance with their beliefs and conscience."