Dr Williams remains until Dec as Archbishop of Canterbury 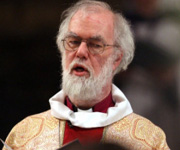 There has been no decision by the Crown Nominations Commission on the new Archbishop of Canterbury. The 16-member commission spent two days this week deliberating candidates and was to put two names forward to Prime Minister of England, David Cameron. At the end of the meeting, held at an undisclosed location, the Church of England issued a statement suggesting the commission had been unable to reach agreement. Dr Williams remains in office until the end of December

The statement read: "This week's meeting of the Crown Nominations Commission (CNC) has been accompanied by much speculation about possible candidates and the likely timing of an announcement of the name of who will succeed Dr Rowan Williams as Archbishop of Canterbury when he steps down to become Master of Magdalene College.


"The CNC is an elected, prayerful body. Its meetings are necessarily confidential to enable members to fulfil their important responsibilities for discerning who should undertake this major national and international role. "Previous official briefings have indicated that an announcement is expected during the autumn and that remains the case; the work of the Commission continues.


"There will be no comment on any speculation about candidates or about the CNC's deliberations. Dr Williams remains in office until the end of December." There has been much speculation over who will succeed Dr Williams, with the Archbishop of York, Dr John Sentamu and the Bishop of London, Dr Richard Chartres among the favourites.


It appears, however, that not all bishops wish to be the next Archbishop of Canterbury. The Bishop of Norwich, the Rt Rev Graham James, told the BBC he was praying not to be chosen. "I'm fairly sure the whole process will lead, I hope and pray, to God choosing someone other than me," he said.