September 15, 2012
George William Sawday, (1854-1944) a Great missionary of the Wesleyan Missionary Society (Methodist Missionary) was born in England. He went to India and worked at the begining in Tumkur, Karnataka and then moved to Mysore District, did the GOD's work since 1876. Rev.Sawday was the pioneers of modern education in Karnataka who also reinforced Christian missionary base in old Mysore region. He contributed fund for the growth of Christian missionaries. He dedicated 64 years of his life for Karnataka; his prime focus was on education and health. In India, he worked at Mysore, Mandya, Chamarajanagar, Tumkur and its surrounding places. He was recognised in 1923 and awarded the Kaiser-i-Hind Gold Medal (First Class) for his public services in India. 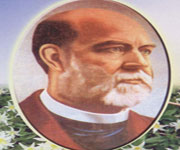 He was born on March 10, 1854 in Sidmouth, Devon, England to George Sawday (1794–1873) and Mary Ann Burt (1814–1883). He was attended Horton Grammar School and then studied Binfield House School, Binfield Road at Clapham, Surrey. In 1871, at the age of 16, he went to Lambeth, London, England. He was accepted for the Wesleyan Methodist ministry in 1873, trained at Headingley College and ordained as pastor.

Rev.Sawday arrived India in 1876, at the age of 22 and he began work at Tumkur, Karnataka to look after an orphanage. Four years later, he was deputed to Mysore, which became his home for the next six decades where he lived and did community service.

Within a year of his arrival, the Mysore District suffered a severe famine left many children parentless. Rev. Sawday took some of those children in and established an orphanage where many of them were trained in agriculture, a few became evangelists. After a year, he returned to Tumkur as superintendent for the circuit and remained there until 1894. During that period he and his wife enthusiastically encouraged education. Rev.Sawday administered both girls' and boys' schools with his wife assisting in teaching the girls, supervising bible-women and running mothers' meetings. He was founded many schools including Forts Girls' School and The girls' schools at Sira Karnataka. Both were deeply involved with the work of an orphanage. Much of the couples were worked was amongst 'out-castes'.


Rev.Sawday also managed the reading rooms and places of worship, supervised the construction of housing for Indian ministers including those parentless children who survived the famine of 1877 and 1888 and founded Christian villages in the Mysore District. By February 1894, he and his wife were suffered from serious health problems and they had lost their two children.

Rev.Sawday and his wife were forced to return to Englan. In London, his wife, Sarah Trot Curnock was died on July 04, 1895, at the age of 42, at Roupell Park, Tulse Hill, London and buried at West Norwood Cemetery. Afterwards, he worked Essex, in England.

In 1900, he returned to Mysore District, working in Mysore City until 1932. In the meantime, Rev. Sawday visited many times to England as part of his mission to raise funds for a hospital and school in Mysore. Queen Victoria, who was also the ruler of India, extended funds to set up Victoria Girls' School in 1903. In 1932, he returned to England through Calcutta, West Bengal, India and arrived on August 09, 1932 at Bishopgate, London, England.

Prince and Princess of Wales visiting Mysore, before the opening of the Hospital, the Prince and Princess of Wales (later King Edward and Queen Alexandra) much interested in the progress of work towards the hospital and to show their sympathy and they had sent large autographed portraits to the Hospital for the opening ceremony. The Maharaja of Mysore also had given to the hospital a large handsome picture of himself.

During that period, there was a significant expansion in both the church infrastructure and the number of worshippers. Rev.Sawday became involved with medical work and was instrumental in the building of the Mary Calvert Holdsworth Hospital (Mission Hospital) which was opened in 1906. Then he became its superintendent, supervising further expansion. He was established number of schools and a few chapels including at Hunsur and Idah. He was involved in constructing a church at Tilak Nagar which was later dedicated to him. As an honor to his dedicated service to the society, Sadway Memorial Church was constructed in Mandya in 1924.

His work was officially recognised in 1923 when he was awarded the Kaiser-i-Hind Gold Medal (First Class) by the British monarch for public services in India. In 1932, he became a supernumerary and returned to England temporarily. By 1933 he had returned to Mysore and get retired, was still very active in the district's affairs, particularly with regard to the Mary Calvert Holdsworth Hospital.

Rev. Sawday served diligently in Mysore for more than 60 years. One of his greatest and important contributions to the Mysore citizenry was the "Mission Hospital". He planned construction of Holdsworth Memorial hospital, popularly known as Mission Hospital. The hospital is a great memorial to lovely life; and no less to the generosity and untiring efforts of him. In fact, Rev.Sawday, in addition to his miscellaneous duties, planned and built and was responsible in collecting subscriptions, with the exception of the Government grant, for its regular maintenance. The hospital was planned after Mysore was hit by plague in 1890s during which thousands of people died. The Mysore Royal Family lent its valuable support with generous donations to the cause and saw that it was on a sound financial footing.


In India, he worked in Mysore, Mandya, Chamarajanagar, Tumkur and its surrounding places and spent five decades as a missionary. During his period, he purchased acres of lands in those places and built orphanages, boarding homes, schools, hospitals besides prayer halls as well.


He was close to Maharaja of Mysore, Nalwadi Krishnaraja Wadiyar, who helped him in constructing schools and hospital. Appreciating his developmental works and service to the society, Krishnaraja Wadiyar conferred 'Kaisar-I-Hind' title, which was given for distinguished service to society, on him. The Mysore administrators named a road after him in Mandi Mohalla. He has established "Sawday-fund" to help pastors after their retirement.

The heritage department has identified his house "Sawday House", a two-storey structure, as vintage stock considering its architectural significance. The footprints he had left behind speak about his achievements and love for the city he saw growing. He was the Secretary of the Mysore District Evangelistic Band for over 50 years and extended missionary services in the Old Mysore region before retiring from service in 1931.