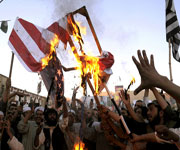 St.Paul Lutheran Church in Mardan was burnt by angry mob protesting against the anti-Islam film on September 21, 2012. About 8,000 strong mob broke into the Church compound and the angry mob set the fire on Church along with two Personage and the adjacent Head-Teacher's house of the local Christian school. The Christian school has been looted. Newly-installed computers have been stolen. The Bishop of Peshawar, Rt. Rev. Humphrey Peters has appealed for support from the Anglican Communion condemned the attack: "The damage has been very severe and we will need to rebuild. We are asking for people around the world to keep us in your prayers".

Moderator of the Church of Pakistan

The Moderator of the Church of Pakistan, Most Rev. Samuel Azariah Samuel condemned the attack: "This news is very damaging to relations between the communities in Pakistan and around the world. The Government and faith leaders in Pakistan have a role to play in education people that they have the right to protest, but to damage property and terrify people in this way is completely wrong. The Government and faith leaders should provide the lead in preventing attacks."


The Diocese of Peshawar, where the attack took place, provides education and health services to the local community – Muslim and Christian alike and provided substantial support to victims of floods and a major earthquake in recent years, regardless of their religious affiliation. Four Christians are already killed in Karachi and one church is burnt in Karachi in response to the film "Innocence's of Islam".