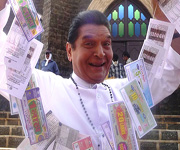 Catholic groups in India have called for the protest of an upcoming Hindi film if scenes portraying believers and clergy in an offensive manner are not removed from the film. "If the clergy of any other religion would not be seen in such a manner, why is it expected that the Christian community keep quiet over such mockery and ridicule of its faith?" Joseph Dias said in a statement from the Catholic-Christian Secular Forum. Joseph Dias, who is head of the ecumenical group, noted that while stereotyping of Christians has existed in films, the movie "Kamaal Dhamaal Malamaal".

Kamaal Dhamaal Malamaal is an upcoming Hindi comedy film directed by Priyadarshan. It stars Nana Patekar, Shreyas Talpade and Paresh Rawal. The film is being and produced by Percept Picture Company. It is a remake of Malayalam blockbuster film Marykkundoru Kunjaadu, story which was written by Benny P. Nayarambalam.


Among the objectionable scenes in the above said film are a dance number featuring a Catholic priest on the steps of a church while wearing a garland of lottery tickets and rosary, a live person hiding in a coffin marked with a cross, and a priest holding a bouquet of flowers bearing the message, "I love you."


In an e-mail to supporters, Joseph Dias encouraged all Christians to voice their disapproval over the film, which is set to release Sept. 26. Dias said that for the most part, Christians do not "protest vociferously enough." An official said that the delegation of representatives of Catholic groups and a priest representing the Archdiocese of Bombay met and submitted a memorandum to Central Board of Film Certification Chairperson Leela Samson on Saturday asking that the film's release be postponed until the objectionable scenes are removed. Copies of the memorandum highlighting the community's grievances have also been sent to Information & Broadcasting Minister Ambika Soni and censor board CEO Pankaja Thakur, according to Judith Monteiro, Secretary of Association of Concerned Catholics (AOCC).


Judith Monterio, Secretary of Association of Concerned Catholics said the negative portrayal of Christians is so serious that a special screening of the film to a board of Catholic representatives should be required before the film can hit theaters, the Times of India reported.


Despite the Indian Government having control over the censorship and rating of the country's booming film industry, Dias said it seems that movies mocking Christianity slip through more easily than others. "The movie passed by the (Central Board of Film Certification) has hurt our religious sentiments and is giving the impression that the government is taking Christians for granted," he said.


Catholic Secular Forum chief Joseph Dias blames that stereotyping of Christians has existed in films. "This time with the priest shown in such bad light, Bollywood has hit a new low. We call for the resignation of Leela Samson and transfer of Thakur," an angry Dias said.


Father Rueben Tellis of the Bombay archdiocese said that a permanent member of the Catholic community should be placed in the Central Board of Film Certification to prevent future offenses. Although India is the second most populous country in the world, with roughly 1.2 billion people, only about two percent of the population is Catholic. Source Catholic News Agency