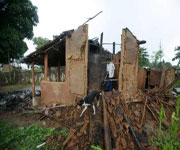 Justice A S Naidu, a former judge of the Orissa High Court, will now head the investigation into the 2008 anti-Christian violence that rocked Kandhamal district in Odisha. He replaces Justice SC Mohapatra, who died in May following a brief illness. Naidu, who joined the Bar in the year 1973, past served as counsel for several judicial Commissions of Enquiry set up by the Government of Odisha. He will now continue the probe that came to a grinding halt after Justice Mohapatra's death. The one-man judicial Commission was set up in September 2008. Although the Commission was to submit its report within six months, it took five extensions as the probe required more time.

The Commission's chief tasks were to investigate the sequence of events and circumstances leading to the killing of Swami Laxmananda Saraswati and the incidents of violence in its aftermath. On July 1, 2009, the Commission had submitted a 28-page 'interim report' to the State Government, recommending measures that could be adopted to prevent recurrence of violence in Kandhamal. The Mohapatra Commission had received nearly 700 affidavits. Sources said the examinations of three witnesses were halfway through when justice Mohapatra passed away.


Kandhamal district had witnessed communal violence after the killing of Saraswati and his aides at the Jalespata Ashram Aug 23. Close to a hundred were murdered and thousands were rendered homeless in the aftermath. A fact finding report on the situation of the violence affected people said at least 10,000 people are yet to return to their respective places.


As for the 245 cases disposed by the Fast Track Court, convictions have been made only in 73 cases. Total persons acquitted are 2433 while only 452 persons have been convicted. In a memorandum to the Governor of Orissa, the Kandhamal Nyaya Shanti O Sadbhabana Samaj, an organisation comprising of victims, activists and movements, has demanded for urgent steps to ensure justice and peace is restored in Kandhamal district.