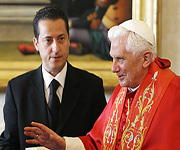 The former butler of Pope Benedict XVI has gone on trial in the Vatican after he allegedly leaked confidential documents to the Italian media. Paolo Gabriele was a personal servant of the Pope for several years and held the keys to the papal apartments. He is accused of taking the Pope's confidential documents and passing copies of them over to Italian journalist Gianluigi Nuzzi, who used them in his book "His Holiness: The secret papers of Pope Benedict XVI", published in May.

Paolo Gabriele is charged with aggravated theft and could face up to four years in prison if he is found guilty. Although the trial is taking place in the Vatican, the sentence would be served in an Italian prison. According to prosecutors in June, Gabriele claimed that he had leaked the documents in order to expose corruption in the Vatican. "Seeing evil and corruption everywhere in the Church … I was sure that a shock, even a media one, would have been healthy to bring the church back on the right track," he was quoted as saying.


The Pope is at liberty to pardon Gabriele if he is found guilty. A week after his arrest, the Pope said the scandal had "brought sadness in my heart". Also standing trial is Claudio Sciarpelletti, who worked as a computer technician at the Vatican. He is accused of aiding and abetting a crime.