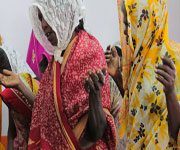 The denunciation comes from the Global Council of Indian Christians (GCIC) that under pressure from Hindu nationalists, a local administrator denies the status as a place of worship to a community hall legally built by a Christian community. Usually, the Tamil Nadu is known as an example of harmony and development among the Hindu, Christian and Muslim communities. "Alarming" growth of religious intolerance in Tamil Nadu, a State of Southern India, generally taken as an example of development and harmony between the different communities.

Many Anti-Christian incidents in 2012

The complaint comes from the Global Council of Indian Christians (GCIC), that reports of 13 anti-Christian incidents the have occurred since the start of 2012. In all the cases, the victims have been Pentecostal or Protestant communities, the object of discrimination and persecution of various kinds, perpetrated by Hindu ultranationalist groups belonging to the umbrella group of Sangh Parivar ("Family of associations"). Another peculiarity is the almost total silence of political and legal institutions, which often allow the culprits to remain free.


One of the most egregious cases concerns the Rev. S. Suresh Rajan, for 12 years at the helm of the Pentecostal Church of Vivekanandapuram. His community has 300 faithful who gather each Sunday in a thatched hut. A few months ago, the pastor was able to buy a small piece of land, where he built a Community Hall. But when he completed the building the District Collector (local administrator) Mr.S. Nagarajan denied permission to use it as a place of worship. They faithful then appealed and on June 07 Judge K. Venkatarajan sided with the Christians, giving the District Collector eight weeks to change the status of the Hall. Under pressure from Hindu radical activists in the area, Nagarajan has continued to deny permission and has asked the Christians to appeal to the Tamil Nadu Government. At the moment, the community of Rev. Rajan still does not have a church in which to celebrate its prayer services.


For Sajan George, President of the GCIC, the gravest aspect of this whole story is "the obstinate disobedience of a court order "that" will only serve to fuel in the Christian community the mistrust of government and justice". About 89% of the populations of Tamil Nadu are Hindus, followed by the Christian minority (6.1%) and Muslims (5.6%). Christianity is widespread especially in the Southern districts of the state, which are home to some of the places symbolic of Christianity in India: St. Thomas Mount (Chennai) where the martyrdom of St. Thomas the Apostle allegedly place; St. Thomas was the disciple of Jesus who brought Christianity to India; San Thome Basilica, dedicated to St. Thomas; Our Lady of Good Health of Vailankanni, known as the "Lourdes of the Orient".