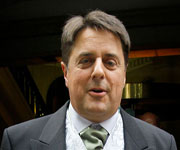 British Political Party leader Nick Griffin, who is Chairman of the British National Party (BNP) and Member of the European Parliament (MEP) for North West England, has told Premier Christian Radio that he is prepared to go to prison to protect the rights of Christians and heterosexuals. He was speaking on the radio station after comments he wrote on Twitter in response to a court ruling against two Christian B&B owners sparked anger.

A court judge this week ordered Christian B&B owners Susanne and Mike Wilkinson to pay £3,600 in damages to gay couple Michael Black and John Morgan after they refused to let them share a double bedroom at their B&B in Cookham, Berkshire.


The judge acknowledged the sincerity of Mrs Wilkinson's Christian beliefs but deemed that the policy had broken equality laws by discriminating against Mr Black and Mr Morgan. Following the ruling, Griffin took to Twitter to publish the home address of Mr Black and Mr Morgan, and call BNP supporters to bring "drama" to their house. His comments are being investigated by police.


Mr Wilkinson reacted to Griffin's comments by expressing their sympathy with Mr Black and Mr Morgan, and voicing their opposition to intimidating behaviour. Speaking on Premier, Mr Griffin said he was "always" prepared to go to jail. "I don't want to, but the fact is that we are in, now, a totalitarian society where the indigenous majority of Christians and heterosexuals are the oppressed majority and I'm prepared to go to prison to protect their rights," he said.