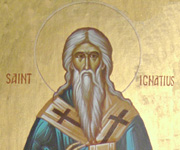 On October 17, the Roman Catholic Church remembers the early Church Father, Bishop and Martyr Saint Ignatius of Antioch, whose writings attest to the sacramental and hierarchical nature of the Church from its earliest days. Eastern Catholics and Eastern Orthodox Christians celebrate his memory on Dec. 20. In a 2007 general audience on St. Ignatius of Antioch, Pope Benedict XVI observed that "no Church Father has expressed the longing for union with Christ and for life in him with the intensity of Ignatius." In his letters, the Pope said, "one feels the freshness of the faith of the generation which had still known the Apostles. In these letters, the ardent love of a saint can also be felt."

Born in Syria in the middle of the first century A.D., Ignatius is said to have been personally instructed – along with another future Martyr, Saint Polycarp – by the Apostle Saint John. When Ignatius became the Bishop of Antioch around the year 70, he assumed leadership of a local church that was, according to tradition, first led by Saint Peter before his move to Rome.


St. Ignatius of Antioch bore witness to Christ publicly for the last time in Rome's Flavian Amphitheater, where he was mauled to death by lions. "I am the wheat of the Lord," he had declared, before facing them. "I must be ground by the teeth of these beasts to be made the pure bread of Christ." His memory was honored, and his bones venerated, soon after his death around the year 107.