Charges made against Newly Converted Christians in Iran 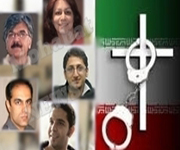 Five Christian converts Mojtaba Hosseini, Mohammad-Reza Partoei Kourosh, Vahid Hakkani, Homayoun Shokouhi and his wife Fariba Nazemian face the feared Revolutionary Court in the city of Shiraz Monday, October 15. Iran has increased its pressure on Iranian Christian converts during recent years. It has closed churches or prevented Farsi-speaking people from entering churches and uses all means to restrict and suppress "freedom of religion".

Five Christians have been charged with creating illegal groups, participating in house church services, propagation against the Islamic regime and defaming Islamic holy figures through Christian evangelizing, the agency said. There was no immediate known response from Iranian authorities but News Agency, comprised of Christian rights activists and writers, has previously reported on Christian court cases. The Christians were reportedly detained after security forces raided a house where they gathered for worship.


This is not the first time some of them are prosecuted. In May 2008, Mojtaba Hosseini and Homayoun Shokouhi already received a five year suspended sentence with eight other Christian converts because of their faith, Christians said. With one year still remaining of that sentence, trial observers said their prior case may also be reviewed and impact the upcoming trial, where prosecutors are expected to seek long prison terms.


Since their arrest, all five Christian prisoners were reportedly held separately in wards of Adel-Abad prison in Shiraz with murderers and drug dealers. Family members are reportedly facing difficulties as well. "Homayoun Shokouhi and his wife, Fariba Nazemian, have two children, a 17 year old son and a 12 year old daughter. Their children are totally alone since their parents' arrest and are going through many difficulties," News Agency said. Iranian officials have not accepted please for a temporary release on bail, according to Iranian Christians familiar with the case.


Local Christians said the believers' hands and feet were chained when they were transferred to pretrial hearings, which critics claim would violate Iranian prison riles for prisoners of conscience. Iran's Islamic government has increased its pressure on Iranian Christian converts in recent years amid concerns among officials about spreading Christianity in the country, rights activists say. Authorities are known to have detained Christians throughout Iran as well as closing churches and preventing Farsi-speaking people from entering congregations. Iran's government has defended its policies, saying it defends Islamic values. Source Bos News Life.