Difficult but not Impossible says Pope 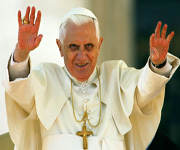 "It will be very difficult but not impossible for one who is rich to enter the Kingdom of God." Before the Angelus, Benedict XVI spoke about Jesus' warning to the young man mentioned in today's Gospel. In front of 30,000 people in St Peter's Square, he also cited the examples of those "who used their wealth in an evangelical way, reaching sainthood. Let us think only about Saint Francis, Saint Elizabeth of Hungary and Saint Charles Borromeo."

After the Marian prayer, the pontiff spoke of yesterday's beatification in Prague of Frederick Bachstein and his 13 confreres from the Order of Friars Minor. "They were killed in 1611 because of their faith. They are the first Blessed of the Year of faith and martyrs. They remind us that believing in Christ means willingness to suffer with Him and for Him." "We do not fear," he added in his greetings in French, "to live and proclaim our faith in God. Even today, living for God forces us to make choices. Sometimes, they are hard, but we know that God accompanies us and helps us do good because his grace always precedes us."


"Sunday's Gospel (Mk, 10:17-30)," the pope said before the Angelus, "is centred on wealth. Jesus teaches that it will be very difficult but not impossible for one who is rich to enter the kingdom of God. In fact, God can gain the heart of a person with many possessions and push him towards solidarity and sharing with those in need and the poor, so that he can enter the logic of giving. This way, he can get on the path of Jesus Christ who, as the Apostle Paul wrote, 'for your sake [. . .] became poor although he was rich, so that by his poverty you might become rich' (2 Cor, 8:9)."


"As is often the case in the Gospels, everything began with an encounter, the one between Jesus and the man who 'had many possessions' (Mk, 10:22). The latter had observed all the commandments in God's Law since his youth, but had not found true happiness. For this reason, he asked Jesus 'what must I do to inherit eternal life?' (see 17). On the one hand, he was attracted, like everyone else, to the fullness of life; on the other hand, being used to his wealth, he thought he might somehow 'buy" eternal life, perhaps observing some special commandment. Jesus was aware of the man's deep desire, wrote the Evangelist, and looked at him full of love, as God did (see 21). However, Jesus understood the man's weakness, his attachment to his many possessions. For this reason, he suggested he give everything to the poor so that his treasure and his heart be in heaven and not on earth. '[C]ome, follow me!' (see 21) he told him. However, instead of welcoming Jesus' invitation with joy, he went away sad (see 22) because he could not give up his possessions, which could never give him happiness and eternal life."


"At this point, Jesus gave the disciples, and us today, his teaching: 'How hard it is for those who have wealth to enter the kingdom of God' (see 23). The disciples were amazed at his words, even more so when Jesus added, 'It is easier for a camel to pass through [the] eye of [a] needle than for one who is rich to enter the kingdom of God.' Seeing their astonishment, he said, 'For human beings it is impossible, but not for God. All things are possible for God' (see 24-27)."


"Well," said Saint Clement of Alexandria, "first let the point of the parable, which is evident, and the reason why it is spoken, be presented. Let it teach the prosperous that they are not to neglect their own salvation, as if they had been already fore-doomed, nor, on the other hand, to cast wealth into the sea, or condemn it as a traitor and an enemy to life, but learn in what way and how to use wealth and obtain life." In his greetings in English, the Holy Father said, "may we [. . .] have the courage to ask the Lord what more can we do, especially for the poor, the lonely, the sick and the suffering".