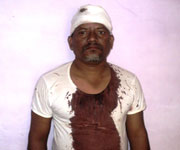 An Indian evangelical pastor was recovering of injuries after he and his family were beaten by "anti-Christian" Hindu extremists near the capital New Delhi, a major mission group and relatives said. Lal Mani Prasad of the Immanuel Believers Fellowship congregation was reportedly beaten last Sunday, October 14, at his home in the Narela area of North West Delhi while getting ready for his church's Sunday service.

In published remarks his son Samuel Prasad, who suffered a broken hand said at least two men entered the house and used a steel water bucket to hit his father's head till he was unconscious. The beatings were encouraged by nearly a dozen other Hindus who earlier hurled stones and other materials at the pastor's family home, Christian witnesses said. "The pastor was beaten badly by the anti-Christians while getting ready for his church's Sunday service," added mission group Hopegivers International (HI), which supports the family.


Additionally, his wife, son and daughter were badly bruised with rods in the 30-minute attack, confirmed Hopegivers International President and Chief Executive Officer Samuel A. Thomas. Pastor Prasad was taken to the private hospital, treated and released. After a few days, he was readmitted...with internal bleeding. Local Christians said the attack came after the family was told this year by "extremist Hindus" that they would kill the pastor if he continued with his Christian activities.


HI said its pastor had been serving the Lord...with the ministry for the last 15 years. Thomas said "he had urged supporters to pray for the family who have to rebuild their lives and home and they also destroyed his kitchen, bedroom and motorcycle and there has been no help from the authorities".


Pastor Prasad said in brief remarks he was summoned to testify by police, but that he had been unable to go because of his injuries. Police said however they had registered the so-called 'First Information Report' required to launch criminal proceedings. No arrests were reported till October 19.


Thomas told BosNewsLife that HI was raising $5,000 to pay for the pastor's medical bills and a new motorcycle so he can continue to share the Gospel of Jesus Christ. Evangelism is part of the pastor's activities.


Hindu groups have been concerned about the spread of Christianity in this predominantly Hindu nation. Among those converting are many 'Dalits', long viewed as the 'lowest caste' in India's ancient system of Hinduism, according to church and mission groups. The latest violence has underscored concerns among rights activists about attacks throughout India against devoted Christians and churches.