Kandhamal violence should be revised: Supreme Court of India 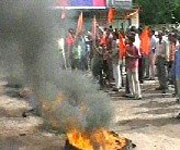 On hearing a writ petition filed by Human Rights activists and survivors of the Kandhamal violence, the Supreme Court today issued a notice to the Government of Odisha, the State's Police and the Central Bureau of Investigation. The petition, filed under the banner of Initiative for Justice, Peace and Human Rights, sought fresh investigation and re-trials outside the State of Odisha. The State has dismally failed to get convictions in the two Fast Track courts in 30 cases of murder by hacking and burning in the anti-Christian violence in August 2008.

The bench consisted of Justices RM Lodha and Anil R Dave. The plaintiffs were represented by Senior Advocate Pallav Sishodia. "Faulty and defective investigation on the part of the police, coupled with a perfunctory trial and unprincipled prosecution has left victims of the 2008 riots in Kandhamal without any hope of justice," said Dr John Dayal, Secretary General, All India Christian Council.


Out of the over 2500 criminal complaints only 828 FIRs were registered by the police. After investigation, the police filed charge sheet in 512 cases and final report in about 315 cases. "Till date in only one case there has been a conviction for murder under section 302 of the Indian penal code," pointed Dayal. "The petitioners had prayed for reinvestigation of the cases by Central Bureau of Investigation, the institution of a commission of inquiry and transfer of cases to any other state," he said.


The killing of VHP leader Laxmananda Saraswati in August, 2008 triggered large scale violence against Christians. Saraswati was killed at the Jalespata Ashram in Kandhamal along with four of his disciples. According to Human Rights activists, the violence displaced over 56,000 people, of which 10,000 have not been able to still return home.

Over 5,600 houses and more than 295 churches and institutions were burnt. Christian groups have alleged there were over 100 murders and several rapes. The Government has only acknowledged less than 40 murders.


Last month, the Odisha Government named Justice A S Naidu, a retired High Court Judge, the new head of the Judicial Commission probing the killing of Saraswati and communal violence in Kandhamal.

It may be recalled that the State Government had set up a judicial commission headed by Justice Sarat Chandra Mohapatra to probe the matter from September 17, 2008. Justice AS Naidu took charge of the Kandhamal Riots Commission following the death of Justice Mohapatra.