Many Christians don’t know basics of their faith says Pope 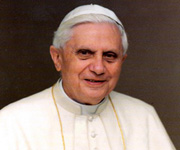 "Christians today often do not even know the central core of their Catholic faith," Pope Benedict XVI observed at his regular public audience on October 17. At his regular weekly audience, the Holy Father announced that he was beginning a new series of catechetical talks, dedicated to the content of the faith, for the Year of Faith. He said that the goal of the Year of Faith and thus of his weekly talks is to renew our enthusiasm at believing in Jesus Christ. The faith, the Pope said, "is not something extraneous and distant from real life, but the very heart thereof." He added that a clear and firm belief in Christian doctrine "does not limit life, but makes it human."


The fundamental content of the Christian faith, the Pope said, can be found in the Creed. Those fundamental beliefs, in turn, form the basis for Christian moral life. "It is the Church's duty to transmit the faith, to communicate the Gospel, so that Christian truths may become a light guiding the new cultural transformations, and Christians may be able to give reasons for the hope that is in them."


Ignorance about the fundamentals of faith, the Pope said, leaves believers vulnerable to "certain forms of syncretism and religious relativism, with no clarity about which truths must be believed and the salvific uniqueness of Christianity."


These problems are acute today, the Pope continued. He said: "The process of secularization and a widespread nihilist mentality, in which everything is relative, have left a strong imprint on the collective mentality." He revealed that surveys taken among the faithful around the world in preparation for the current Synod of Bishops showed the negative effects of confusion about the fundamentals of Christian belief: "the faith lived passively or privately, the rejection of education in the faith, the rupture between faith and life."