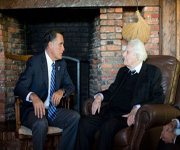 Republican Presidential Candidate Mitt Romney met with evangelical icon Billy Graham on Thursday at the evangelist's remote mountaintop home in North Carolina. Romney traveled to Graham's residence in Montreat, just outside Asheville, to meet with Graham and his son Franklin Graham, a high-profile pastor in his own right. Evangelist Billy Graham commended Mitt Romney for his values and moral convictions after meeting with the Republican Party (also called Grand Old Party (GOP)) presidential candidate at his North Carolina home on Thursday.

"What impresses me even more than Governor Romney's successful career are his values and strong moral convictions," Graham said in a statement. "I appreciate his faithful commitment to his impressive family, particularly his wife Ann of 43 years and his five married sons." Graham, 93, said he was friends with Romney's late father, former Michigan Governor George Romney and has followed the younger Romney's career.


The beloved evangelist, who has preached the Gospel to more people in live audiences than anyone else in history, prayed with Romney, a Mormon. "It was a privilege to pray with Governor Romney – for his family and our country," he stated.


"I will turn 94 the day after the upcoming election, and I believe America is at a crossroads. I hope millions of Americans will join me in praying for our nation and to vote for candidates who will support the biblical definition of marriage, protect the sanctity of life and defend our religious freedoms." Graham has been described as the "pastor to presidents" as he has been a friend to every U.S. president since Harry Truman. He met with President Obama in 2010 and prayed with him. Graham also gave Obama two Bibles.