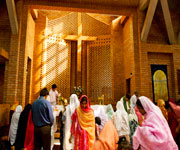 A Christian worker was sent him to jail on false charges of blasphemy against Islam by the Pakistani Police on October 27, a rights group said. Sweeper and cleaner Barkat Masih, who converted from Hinduism to Christianity, was detained October 1 in the eastern city of Bahawalpur following a dispute with co-workers, explained Pakistan-based advocacy group World Vision in Progress (WVIP). Rights activists said his problems began during a September night-shift at a Muslim shrine, where two men demanded his keys.


"They asked him to give them the duplicate keys of the shrine so that they could take the property papers of the land on which the shrine was built," said Farrukh H. Saif, WVIP's executive director. Masih refused because he realized they would use those documents to obtain the land through illegal means, according to WVIP investigators.


The two men, identified as Muhammad Saleem and Muhammad Shoaib, threatened him with consequences and one month later submitted an application to local police alleging that Masih committed blasphemy against Islam's Prophet of Islam Mohammed and Allah, Saif said. BosNewsLife wasn't able to reach the two men for comment; however rights activists say Pakistan's controversial blasphemy legislation has been used to settle personal grievances.


Saif said his group was convinced of Masih's innocence. His superiors knew him as an honest man who besides the shrine also worked at two other locations, including a nearby high school. He said that WVIP is pressuring authorities to release Masih from the notorious Bahawalpur Central Jail, where reports say dangerous criminals are being held. "Our lawyers are doing their best to get the case against Barkat Masih overturned," he told BosNewsLife in a statement. He said a final court hearing on the case was expected as early as November 8.


At least 15 people are known to be on death row over blasphemy allegations and at least 52 people have been killed while awaiting trial on similar charges, according to rights activists.