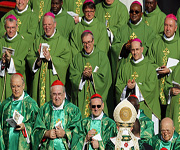 Pope Benedict XVI on Thursday marked the 50th anniversary of the Second Vatican Council, the church meetings he attended as a young priest that brought the Catholic Church into the modern world but whose true meaning is still hotly debated. Benedict celebrated Mass in St. Peter's Square, attended by patriarchs, cardinals, bishops and a dozen elderly churchmen who participated in the council, and later will greet the faithful re-enacting the great procession into St. Peter's that launched the council in 1962.

In his sermon, Pope Benedict XVI urged the faithful to return to the "letter" and "authentic spirit" of the council found in the Vatican II documents themselves, rather than rely on the distorted spirit promoted by those who saw in Vatican II a radical reform away from the church's tradition. "The council did not formulate anything new in matters of faith, nor did it wish to replace what was ancient," Benedict said from the steps of St. Peter's. "Rather, it concerned itself with seeing that the same faith might continue to be lived in the present day, that it might remain a living faith in a world of change."


The anniversary comes as the church is fighting what it sees as a wave of secularism erasing the Christian heritage of the West and competition for souls from rival evangelical churches in Latin America and Africa. Clerical sex abuse scandals, debates over celibacy for priests, open dissent among some priests in Europe and a recent Vatican crackdown on liberal nuns in the United States have also contributed to erode the church's place in the world. The pope has spent much of his pontificate seeking to correct what he considers the misinterpretation of Vatican II, insisting that it wasn't a revolutionary break from the past, as liberal Catholics paint it, but rather a renewal and reawakening of the best traditions of the ancient church.


In that vein, he decided to mark the 50th anniversary of the council with the launch of a "Year of Faith," precisely to remind Christians of what the council truly taught and seek to "re-evangelize" those Catholics who have fallen away from their faith in the decades since. He lamented Thursday that a "spiritual desertification" had advanced where people think they can live without God. "In the council's time it was already possible from a few tragic pages of history to know what a life or a world without God looked like, but now we see it every day around us," he said, referring to the totalitarian, atheistic regimes of the 20th century. "But it is in starting from the experience of this desert, from this void, that we can again discover the joy of believing, its vital importance for us, men and women."


Benedict was the Rev. Joseph Ratzinger, a young priest and theological consultant to German Cardinal Joseph Frings when Vatican II began, and he has recently reminisced about what the council sought to accomplish, where it succeeded and where it erred. "It was a splendid day on 11 October, 1962," Benedict wrote in a forward to a commemorative book about the anniversary published this week by the Vatican newspaper. "It was a moment of extraordinary expectation. Great things were about to happen."


Indeed, by its conclusion in 1965, the council had approved documents allowing for the celebration of Mass in the vernacular rather than Latin, and revolutionizing the church's relations with Jews, Muslims and people of other faiths. Yet as great as that document on relations with other faiths was, Benedict wrote, a "weakness" has emerged in the ensuing years in that "it speaks of religion solely in a positive way and it disregards the sick and distorted forms of religion" that have become all too apparent.


Ratzinger was joined at Vatican II by another young theologian, Hans Kueng, who subsequently brought him to Tuebingen University in southern Germany as professor of dogmatic theology, helping promote an academic career that resulted in a papacy.


In the years since, Kueng has become one of Benedict's greatest critics, complaining that there has been no progress in reforming the church since Vatican II and calling for a grassroots revolt against the church hierarchy to carry it out. "The council was unable to guarantee that the reforms would be implemented," primarily because the Vatican bureaucracy was and still is opposed, he said in an interview with German news website ntv-de this week.


Kueng, who lost his official license to teach Catholic theology but continues to teach, has opposed Benedict's outreach to traditionalist Catholics and his reintroduction of the old, pre-Vatican II Latin Mass. "Ratzinger and his peers spiritually live in the Middle Ages," Kueng told n-tv. A similar complaint was made recently by Cardinal Carlo Maria Martini, one of the last liberals in the College of Cardinals, who died Aug. 31. Martini was quoted as saying in his final interview that the church was in need of radical reform and was "200 years behind the times."