Pope tries to get peace in Syria 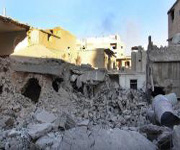 Pope Benedict XVI is sending a delegation to Syria to express solidarity with people caught up in the conflict. Vatican Secretary of State Cardinal Tarcisio Bertone said the visit to Damascus would be an expression of spiritual closeness to our Christian brothers and sisters. The visit will also be used to encourage all those involved in seeking an agreement respectful of the rights and duties of all with particular attention to the demands of humanitarian law. Christians could not "be mere spectators of a tragedy such as the one that is unfolding in Syria", said Cardinal Bertone.

The delegation headed by Cardinal Tarcisio Bertone is planning to make the visit next week. Members will include Archbishop of Kinshasa, Democratic Republic of Congo, Cardinal Laurent Mosengwo Pasinya, and the president of the Pontifical Council for Inter-religious Dialogue Cardinal Jean-Louis Tauran.


"In the certainty that the only possible solution to the crisis is a political solution, and bearing in mind the immense suffering of the population, the fate of displaced persons and the future of that nation, it has been suggested that our synodal assembly express its solidarity," Cardinal Bertone said. He added: "In the meantime time we pray that reason and compassion might prevail."


Bertone said church leaders cannot be simple spectators given the immense suffering in Syria, and said they are convinced the solution must be a political one. The delegation will express solidarity to all the population in the pope's name and offer encouragement to those seeking an accord respecting human rights.