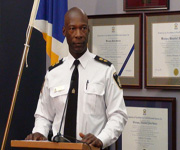 Winnipeg is the capital and largest city of Manitoba, Canada and this is the violent crime capital of Canada The city's new chief of police believes prayer will play a big role in changing that. "I'm a little tired of us…being '[the] murder capital of Canada,'" says Devon Clunis, who was appointed chief of police at the beginning of October. "People consistently say, 'How are you going to solve that?' It's not simply going to be because we're going to go out there and police it away. I truly believe that prayer will be a significant piece of that."

Clunis, a 25-year veteran who is also the police service chaplain, will be sworn in the city's 17th police chief during a ceremony to be held at a later date. He will take over from current chief Keith McCaskill, who has served in that role since December 2007. McCaskill announced in March that he intends to retire when his term ends on Dec. 9, 2012. Clunis' appointment was announced Thursday in a news release from the city's Chief Administrative Officer Phil Sheegl.


"What would happen if we all just truly, I'm talking about all religious stripes here, started praying for the peace of this city and then actually started putting some action behind that?" Devon Clunis adds. "I believe something phenomenal is going to happen in our city. I truly believe it's coming. I don't think I've arrived at this position just by chance."


Devon Clunis, 48, began his career with the Winnipeg Police Service in 1987. Over the past 25 years, he has served in all major areas of the organization and was one of the WPS's first chaplains. Clunis came to Winnipeg from Jamaica with his family when he was 12 and says that going to church is something that he and his family always did.


"Church and faith have always been a part of my life for as long as I can remember," says Clunis, who today attends Kilcona Park Alliance Church with his wife, Pearlene. He says his Christian faith is foundational to everything he does. He distinctly remembers in 1998 when he prayed, "God, I wish one day you'd put me in a place in the police service where I have the opportunity to stand up and tell people there is a God who truly cares about them."


Three weeks later, a colleague told him the WPS was starting a chaplaincy program and asked if Clunis would consider joining. Fourteen years later, Clunis plans to continue being a chaplain even as he takes on his new role.


"Being a chaplain is one of the greatest ways I can serve our members who are now going out and serving the public," he says. "[We] take good care of the caregivers so they can be there for the members of our community." Clunis attributes his success to God. He says he has never asked God to make him a powerful person, but rather, he has prayed that God make him a leader who treats people with dignity and respect and who is successful in his endeavours.