Religious freedom vulnerable all over Asia 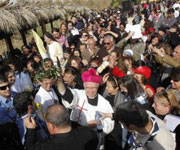 A Catholic report on minority religious freedom in Asia said persecution of Christians continued or worsened in many countries in Asia during the last year. Issued yesterday in Rome by Aid to the Church in Need, a Vatican foundation charged with helping Catholics in poorer countries spread the faith, the report singled out a "terrible year" for Pakistan following the killings of two top politicians, Salman Taseer and Shahbaz Bhatti, who opposed strict blasphemy laws.


China saw "tremendous violations of religious freedom," it added, while Vietnam looked to be following its northern neighbor by promoting patriotic religious groups in opposition to the Church.


Myanmar was seen as making little headway towards tolerance of minority religions despite its recent political reforms, while in North Korea religious freedom continued to be "totally denied."


Meanwhile, India witnessed growing enforcement of anti-conversion laws which coincided with a rise in attacks against minorities, the report said.


Speaking at the Rome launch yesterday, John Dayal, Secretary General of the All India Christian Council said the recent rapid rise of extremist Hindu groups in opposition to what they perceive as an Islamic threat was the main factor behind worsening religious persecution during 2011. "India is in a state of denial," he said. "It refuses to acknowledge that there is such violence taking place."


With the lowest group in India's now-discredited caste system now comprising 60 percent Christians, the possibility that 'untouchables' could unite under Christianity and pose a threat "to the politics of the upper castes" had prompted authorities to slowly strip away their right to choose a religious faith, said Dayal.


Elsewhere, attacks by Muslims on Christians continued in the southern Philippines last year, according to the Aid to the Church in Need report, while in Bangladesh and Sri Lanka intolerance between different religions was noted on numerous occasions.