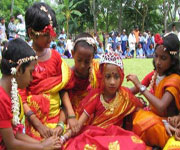 UN agencies on Thursday called on India to take urgent steps to eliminate the widespread practice of child marriage which has lasting negative impacts on the girl child. On the first International Day of the Girl Child, UNICEF and partners urged the decision makers of the country to raise awareness on the negative consequences of child marriage for girls and for society as a whole. United Nations Agencies wrote a letter to Women and Child Development Minister Krishna Tirath in this regard.

In a letter to Women and Child Development Minister Krishna Tirath, heads of UNICEF, UNFPA, UN Women and UN Information Centre reaffirmed the UN's commitment to working with the Government to deliver a multi sectoral response to addressing child marriage, including strengthening law enforcement, investing in the education of girls and giving them skills to become economically empowered. The letter noted that more than 40 percent of the world's child marriages happen in India. "In eight states of the country, more than half of young girls are married before the age of 18," the letter said.


"Child marriage is not a solution to protecting girls from sexual crimes including rape. In fact, child marriage denies a girl of her childhood, disrupts her education, limits her opportunities, increases her risk to be a victim of violence, jeopardizes her health and, therefore, constitutes an obstacle to the achievement of nearly every Millennium Development Goal and the development of healthy communities," the letter stressed.


The United Nations General Assembly on December 19 last year adopted a resolution to declare October 11 as the International Day of the Girl Child. "The International Day of the Girl Child readily reflects the need to put girls' rights at the centre of development," said Anju Malhotra with the Gender and Rights Section in UNICEF. "The UN and partners are coming together to show the incredible progress made and to highlight the ongoing challenges".


Under the headline 'My Life, My Right, End Child Marriage', a series of events and actions are taking place throughout the world to draw attention to this critically important issue. At UN Headquarters in New York, Archbishop Desmond Tutu will join UNICEF, UNFPA and UN Women to discuss ways governments, civil society, UN agencies and the private sector can fight the practice of child marriage.


"Child marriage can often result in ending a girl's education. In communities where the practice is prevalent, marrying a girl as a child is part of a cluster of social norms and attitudes that reflect the low value accorded to the human rights of girls," said Malhotra. Most recent UNICEF estimates indicate that about 70 million young women aged 20-24 were married before the age of 18, with 23 million of them having been married before they turned 15. Globally, almost 400 million women aged 20-49, or over 40 per cent, were married while they were children.


UN Secretary-General Ban Ki-Moon has urged Governments, community and religious leaders, civil society, the private sector, and families to promote the rights of girls and "do our part to let girls be girls, not brides". "Investing in girls is a moral imperative, a matter of basic justice and equality. It is an obligation under the Convention on the Rights of the Child and the Convention on the Elimination of All Forms of Discrimination against Women. It is also critical for achieving the Millennium Development Goals, advancing economic growth and building peaceful, cohesive societies," he said. Source Christian Today India.