Vatican prays for peace in Syria 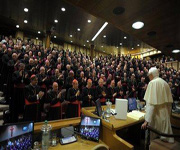 The Synod prays for Syria. The difficulties, but also the hopes of proclaiming the Gospel in the world today is the leitmotif of many interventions today, delivered by representatives of the various continental realities. Cardinal Gracias, in Asian culture, "religion is discipleship to a person more than adherence to a doctrine or obedience to a set of rules." Today's working session in fact opened with a meditation by Bishop Joseph Absi, titular archbishop of the Greek Melkites in Syria, followed by the announcement from Msgr. Nikola Eterovic that the Fathers will pray for peace and reconciliation in the country, at the request of the Syrian bishops.

Then addressing the theme of the XIII General Assembly, "The New Evangelization for the Transmission of the Christian faith", the need to witness to the faith in daily life, of which the Pope spoke yesterday, found an echo today in the Synod on the new evangelization in the words of Cardinal Oswald Gracias, archbishop of Mumbai and Secretary General of the "Federation of Asian Bishops' Conferences". In Asian culture, "religion is discipleship to a person more than adherence to a doctrine or obedience to a set of rules." "The adherence to a doctrine - said Card. Gracias - is the result of being a disciple of a master."


Looking at the reality of the continent, the cardinal pointed out that "the challenges we face are immense. But the possibilities are great. Young Asia is blessed with an unprecedented explosion of communications networks. This should not be seen as a threat, but rather as a great gift from God to be used to spread the Good News." Difficulties, but also the hopes of proclaiming the Gospel in the world today were the theme of many interventions today, given by representatives of the various continental realities.


"In Africa - said Cardinal Polycarp Pengo, Archbishop of Dar-es-Salaam in Tanzania and President of the Symposium of Episcopal Conferences of Africa and Madagascar - there are cultural elements that prevent a true evangelization. Among these factors we can mention the perennial conflicts based on tribal affliation, disease, corruption, trafficking in human beings, the atrocity of child abuse and violence against children and women. " According to the president of SECAM, "another hurdle that the New Evangelization in Africa must not overlook is the reality of Islamic fundamentalism in the continent. In this respect, evangelizers must face the difficulty to communicate with the vast majority of good Muslims, who however do not speak out, and with small groups of fundamentalists, who are not willing to accept even the objective truth which is opposed to their preconceived position. "


The cardinal also highlighted the risk of impoverishing Africa by "exporting" its clergy to other continents suffering a crisis of vocations: "The Church in Africa is being deprived of the most qualified evangelizers, while the Western Church, rich in material terms, receives evangelizers whose main objective is material gain. "


In Europe, "People today are hungry and thirsty for hope," noted Cardinal Peter Erdo, president of the Council of European Bishops 'Conferences (CCEE), though the continent appears weakened by three negative factors: "the demographic decline and aging population, the economic crisis and the weakening of cultural and religious identities". The Church has taken initiatives "to respond to family crisis, including visits to all Catholic families in the name of the parish, on the mandate of the bishop." "Many lay people - he noted - now receive training for this mission."


"The New Evangelization - according to the president of the Latin American Episcopal Council (CELAM), Mexican Archbishop Carlos Aguiar Retes - requires ecclesial communion to reach the New Evangelization and pass on the faith to new generations, the Church must honestly examine its conscience on how to live the faith". For this reason "even if necessary, the institutional organization of the Church is not enough: most of today's humanity does not encounter the Gospel in the permanent evangelization of the Church".