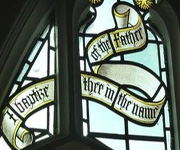 Traditional dividing lines between churches and chapels in Wales in United Kingdom could soon be a thing of the past after a major meeting of five denominations today. Representatives of the five Covenanted Churches such as the Methodist Church, the United Reformed Church, the Presbyterian Church in Wales, the Church in Wales and some Covenanted Baptist congregations are meeting in Aberystwyth to explore radical new ways of working together.

Proposals on the agenda include a new kind of bishop and a single "United Church for Wales", in which there would be an interchange of ordained ministries by those with church or chapel backgrounds. The proposals are outlined in reports to be presented at the conference and taken away by representatives for further consideration within their denominations after today. After a period of deliberation, the Churches will respond to the recommendations at a later date.


The meeting called The Gathering is being joined by the General Secretary of the World Council of Churches, the Rev Dr Olav Fykse Tveit.


Rev Gethin Abraham-Williams, Chair of the Commission of Covenanted Churches, said: "Four decades ago, five of the leading Christian traditions of Wales embarked on a path towards presenting a united witness to the Gospel." They made a solemn covenant before God and with one another in order that they might be brought into one visible Church to serve together in mission to the glory of God.


"At The Gathering, those churches will reassess their progress in achieving those goals. The Gathering will also be an occasion to wait again upon the Holy Spirit for the moment that will 'create out of their separated lives a new ecclesial community committed to common mission in the world'." The day will close with the sharing of bread and wine using a brand new order for Holy Communion.