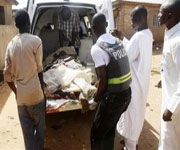 Suspected suicide bombers from Islamist group Boko Haram detonated two cars laden with explosives at a Protestant church during Sunday morning service, killing at least 11 people and wounding 30 others in a major military establishment in northern Nigeria's Kaduna State. A bus drove into the side of the St Andrew Military Protestant Church in a military barrack in Jaji town in Kaduna state and exploded five minutes after a service had started, Reuters quoted army spokesman Bola Koleoso as saying.


About 10 minutes later, explosives inside a Toyota Camry were detonated outside the church. A military source who witnessed the attack said the second bomb was the most deadly, killing people who went to help the injured from the first blast. At least 11 people were killed and 30 were injured.


On Friday, a special military task-force had announced a reward of $1.8 million to anyone who provides information on Boko Haram leaders. Boko Haram, which translates as "Western education is sin" has not claimed responsibility for Sunday's attack. In September, the military killed Abu Qaqa, believed to be Boko Haram's spokesman who used to claim responsibility for attacks by the outfit.


However, the outfit has been targeting churches to create tensions between Muslims and Christians in the state and elsewhere to highlight its demand for the separation of the Muslim-majority north from the Christian-majority south and for the creation of an Islamic state. Last month, at least 15 people, mostly children and women, were killed and about 150 others were injured after a suicide bomber attacked a large Catholic church, Saint Rita's, in Kaduna city. The parish priest, the Reverend Fr Bonet Micah, was among those killed. Kaduna is one of the main targets of Boko Haram because the state has witnessed religious tensions between Muslims and Christians, particularly over the implementation of Sharia law.


According to the Christian Association of Nigerian-Americans (CANAN), which has been lobbying the US Department of State for the designation of Boko Haram as a Foreign Terrorist Organisation, says the outfit has killed more than 700 Christians in Nigeria this year thus far.


According to Human Rights Watch, more than 2,800 people have died in fighting since Boko Haram's insurrection began in 2009. The actual name of the group is Jama'atul Alhul Sunnah Lidda'wati wal jihad, which translates as "people for the propagation of the prophet's teachings and jihad". Mohammad Yusuf, the Islamist cleric who formed the group about a decade ago in Maiduguri city, was against Western education. Yusuf was from the Salafi movement, which has fueled jihadist terrorism in several parts of the world as a legitimate expression of Islam.


It is believed that Boko Haram gained technical sophistication and weaponry with help from groups like al-Shabaab in southern Somalia and al-Qaeda in the Islamic Maghreb in Mali.