Baselios Cleemis from India among six Cardinals appointed by Pope 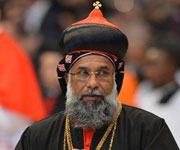 The head of the Syro Malabar Catholic Church, Baselios Cleemis Thottunkal was Saturday among six others who joined the College of Cardinals at a ceremony led by Pope Benedict XVI at Vatican. He received the gold ring and the biretta from the Pope during the ceremony at the Papal Basilica of Saint Peter in the Vatican on 24 November 2012. All six are "cardinal electors", those under 80 years old and are therefore eligible to enter a conclave that will one day choose Benedict's successor.

The life of Baselios Cleemis Thottunkal

He was born on June 15, 1959 as "Isaac Thottunkal" in Mukkoor, a small village close to Mallappally Town in Pathanamthitta District in the State of Kerala in South India. He attended the Minor Seminary Formation in Tiruvalla from 1976 to 1979. He received a B.Phil. degree from St. Joseph's Pontifical Institute, Mangalapuzha, Aluva where he attended from 1979 to 1982. He received a B.Th. degree from the Papal Seminary, Pune where he attended from 1983 to 1986. Thottunkal was ordained a priest on June 11, 1986. He studied for the Master of Theology in Dharmaram College, Bangalore where he attended from 1986 to 1989. Thottunkal took his Doctorate in Ecumenical Theology from Pontifical University of St. Thomas Aquinas (Angelicum), Rome in 1997.


The other new cardinals are American Archbishop James Michael Harvey, Archbishop Ruben Salazar Gomez of Bogota, Archbishop Luis Antonio Tagle of Manila, Beatitude Bechara Boutros Rai, patriarch of the Maronite Catholic Church in Lebanon and Archbishop John Olorunfemi Onaiyekan of Abuja. All the new cardinals are from outside Europe. The Pope has been criticised for appointing mainly Europeans as cardinals in the past. Mar Cleemis is the youngest of the present cardinals. He is also the second prelate from Southern India to be made cardinal this year.


The new consistory raises the percentage of Asian electors from 7 percent to 9 percent. The Pope has said the second consistory he has called this year aims to show that "the Church is a Church of all peoples (and) speaks in all languages".


"Dear friends, let us praise the Lord, who "with manifold gifts does not cease to enrich his Church spread throughout the world" and reinvigorates her in the perennial youth that he has bestowed upon her. To him we entrust the new ecclesial service of these our esteemed and venerable Brothers, that they may bear courageous witness to Christ, with a lively growing faith and unceasing sacrificial love," the Pope said during the hour-long service.