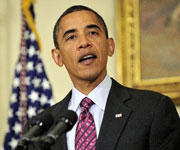 Catholic leaders Pope Benedict XVI and Cardinal Timothy M. Dolan of New York are calling on President Barack Obama to respect the fundamental American principles of life and religious liberty after he won a second term in office. "We will continue to stand in defense of life, marriage, and our first, most cherished liberty, religious freedom," said Cardinal Timothy M. Dolan of New York, President of the U.S. Conference of Catholic Bishops.


In a letter congratulating Obama on his re-election, Cardinal Dolan noted the "great responsibility" with which the American people have entrusted the president and assured him of the prayers of the U.S. bishops. "In particular, we pray that you will exercise your office to pursue the common good, especially in care of the most vulnerable among us, including the unborn, the poor, and the immigrant," the cardinal said.


"We pray, too, that you will help restore a sense of civility to the public order, so our public conversations may be imbued with respect and charity toward everyone," he added. Cardinal Dolan's commitment to defending life, marriage and religious liberty was echoed by other Catholic groups following Obama's Nov. 6 win at the polls. The U.S. bishops have clashed with the Obama administration over religious liberty issues in recent months.


At the center of the conflict is a new federal mandate that requires employers – including religious hospitals, schools, and charitable agencies – to offer health insurance plans covering contraception, sterilization and abortion-inducing drugs. Bishops from every diocese in the U.S. have spoken out against the mandate, warning that it poses a serious threat to religious freedom. More than 100 plaintiffs, including numerous Catholic dioceses, universities and charitable organizations, have filed lawsuits challenging the mandate.


The importance of religious freedom was also emphasized in Pope Benedict XVI's message to Obama. In the letter, which was sent through the apostolic nunciature in Washington, D.C., the Pope offered best wishes to Obama and promised prayers for the president in the coming years. The pontiff also said he hopes that the American founding ideals of freedom and justice may hold a prominent place in the nation's future.


Father Federico Lombardi, director of the Holy See press office, noted that "the U.S. president has an immense responsibility, not only in his own country but also towards the rest of the world, given the role the U.S.A. plays at an international level." "For this reason we hope that President Obama will respond to his fellow citizens' expectations," he said, "serving law and justice for the good and development of all people, and respecting essential human and spiritual values while promoting a culture of life and religious freedom."