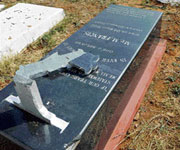 The Christian cemetery of the village of Midiakia in Kandhamal District of Orissa has been desecrated by a group of unknown assailants. The news was released just yesterday, but Rev.Gaurango Nayak, Pastor of the Methodist Church, discovered what had happened a week ago, when he went to the cemetery to pray. The authors of the act removed the crosses from every grave and felled some trees and bushes. According to the pastor, in the next two days all the mounds will be overturned. For the moment, the leaders of the local churches have reported the incident to police and officials, but the authors have not yet been arrested. Police have placed the area under their custody, to prevent both sides from entering the cemetery.

The village of Midiakia is located about 15 km south of Balliguda and is home to various Christians, Catholic, Methodist and Baptist. Several times in the past it has been targeted in anti-Christian violence. During the pogroms of 2008, Hindu nationalists looted all the houses. On July 26, 2011, the Protestant pastor Michael Nayak was killed in an ambush by radical Hindus, but despite evidence the police closed the case as an accident.


Speaking to AsiaNews Sajan K George, President of the Global Council of Indian Christians (GCIC) said he was very concerned about the sinister, subtle and ongoing persecution against Christians in Kandhamal district. He condemns the desecration of the Midiakia cemetery and reiterates its request for further investigation into the case of Michael Nayak and other similar cases, to ensure justice to the Christian community.


John Dayal, activist and member of the National Integration Council of the Central Government of India, presented the fact to two members of the National Commission for minorities, but has not yet received a response. "It is yet another horror story from Kandhamal - Dayal said - and as usual, the Orissa Government continues to deny it."