Christian persecutions increase in Karnataka in 2012 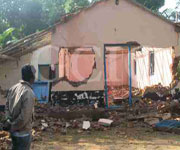 During this year 2012, 39 attacks were perpetrated against the Christian community in Karnataka, according to the Global Council of Indian Christians (GCIC), the latest reported last Friday in two separate locations in the state. In Bellary District, Muslim fundamentalists attacked an Anglican clergyman and tried to destroy Christian churches and Christian-run facilities. In Kolar District, Hindu nationalists from the Bajrang Dal disrupted the ceremony consecrating a Pentecostal church. In both cases, GCIC President Sajan George noted, "fears in Karnataka have been reignited in the hearts of Christians."


In Hospet (Bellary District), a Muslim mob attacked Rev Lewis Mascarenhas, a pastor in the (Anglican) Church of South India (CSI), and badly beat him because he had visited some Muslims who had asked him to talk about Jesus and Christianity. After he arrived, another group of Muslims came and beat him up. Soon after, they dragged the bleeding clergyman to a nearby police station accusing of conducting forced conversions. Police eventually took the reverend to B.C. Acharya Hospital but kept him in their custody.


Meanwhile, other Muslims attacked churches and Christian facilities in Hospet, bent on destroying them. Warned, police moved in quickly to protect the buildings to avoid further attacks. In another incident last Friday, 50 activists from the Hindu ultranationalist Bajrang Dal disrupted the consecration ceremony for the Jesus Prayer Hall, a Pentecostal church, in Kammasahalli village (Kolar District).


The hooligans attacked Rev Girish and the hundred or so worshippers present. They then proceeded to set up a statue of the Hindu god Ganesh, and started a pooja, a Hindu ceremony. Police in Mulbagal arrived at the scene but instead of removing the statue they asked the clergyman to show his title deeds to the property.


"Such attacks are happening on a regular basis in states run by Bharatiya Janata Party" Sajan George noted. The Hindu ultranationalist party backs violent Sangh Parivar groups. In the other case, the attack by Muslims coincided with "big demonstrations organised by the Popular Front of India (PFI) in various Karnataka districts." The PFI is a confederation of Muslim organisations, with some 800,000 members. Although it claims to defend human rights for every community, "it is impossible to separate the Popular Front of India and its campaigns from fresh communal tensions," Sajan George said.