Christians are praying for Barack Obama 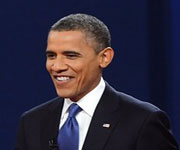 
The General Secretary of the World Council of Churches, Dr Olav Fykse Tveit, sent a message of congratulations to Obama in which he wished him "all the blessings of God's grace" during his second term. "Our prayers are with you and your team as you dedicate yourselves to faithful public service over the next four years," the letter read. He urged Obama to work especially for peace in the Holy Land


"As president of the United States, you can exercise remarkable influence in promoting and establishing justice and peace throughout the earth. And so we pray that the God of life will lead you, as you lead your nation, into the ways of justice and peace. In particular, we pray that you may provide inspired leadership within the international community in the quest for peace with equal justice and mutual respect in Israel and Palestine."


Dr Albert Mohler, President of the Southern Baptist Theological Seminary, raised concerns over Obama's support for gay marriage and abortion. "The election returns and voting data indicate that President Obama's 'evolution' on the issue of same-sex marriage cost him nothing. That probably surprised both sides in that controversy," he said.


"We must pray that God will change President Obama's heart on a host of issues, ranging from the sanctity of unborn life to the integrity of marriage. "We must push back against his contraception mandate that tramples upon religious liberty. Given the trajectory of his first term in office, we are urgently concerned about a second term, knowing that the President will never again face the electorate."