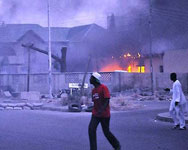 Christian Solidarity Worldwide has expressed fears for Christians in Northern Nigeria after a family was killed in Kaduna State this week. It reports that gunmen opened fire on the home of Yakubu Kayit in Madauchi-Zonkwa. There were reportedly five family members in the house when the gunmen set it ablaze, killing everyone inside. Pastor Bitrus Titus of Living Faith Church, Zonkwa, told CSW Nigeria that the sound of gun fire lasted for close to an hour last night. He added that there was no intervention from security personnel and that the bodies were burnt beyond recognition.


The attack has shocked and angered the Christian community. Some young men took to the Streets to protest the attack and demand that soldiers stationed nearby be removed from their post. Reverend Yunusa Nmadu, Chief Executive of CSW Nigeria met with protesters during a visit to the area on Thursday. He said, "We are saddened by yet another attack on a predominately Christian community and urge the relevant security agents to live up to their responsibilities, especially since there has been a long standing threat that the community and others around would be attacked after the April 2011 presidential electoral violence in Kaduna State. "Our hearts go out to the relatives and friends of the family that has been affected" he added.


Andrew Johnston, Advocacy Director at Christian Solidarity Worldwide (CSW) said, "We send our heartfelt condolences to the relations and friends of the Kayit family. It is deeply worrying to hear that despite the long-standing nature of the threat against the area, the security services did not come to the aid of the victims, and this sustained, brutal attack was allowed to continue for almost an hour. We urge those responsible for security in this area to fulfil their mandate to protect innocent civilians from attack."