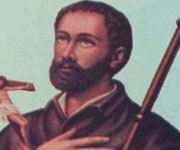 The Goa Catholic Church would for the first time have a prayer service in Spanish next month during the annual feast of St. Francis Xavier. "We have so many brethren who come to pray in honor of St. Francis Xavier. Several of them come from Spain, where the saint hails from. The Mass in Spanish is for them to feel at home," said Fr. Savio Baretto, the Church Priest. He said that prayers are also held in Malayalam, Kannada and Tamil as "we have thousands of worshipers coming from states where those languages are spoken."


The annual feast, which is held every year from Nov. 24 to Dec. 3, is attended by over a million devotees from India and across the world. The saint, who hailed from Navarre, in the Basque region of Spain, heralded Christianity in Goa. After his death in 1552 in Shangchuan in China, his body was first ferried to Malacca in Malaysia and in 1553 stored in the grand Basilica of Bom Jesus, one of the oldest churches in the Indian state.


St. Francis Xavier, incidentally, was among the first Christian missionaries to travel in Japan and Borneo. Believers regard it as a miracle that the body has not decomposed for nearly five hundred years. Sceptics point out that the saint's mortal remains were embalmed to prevent decomposition.


Every year, more than a million believers throng the church complex in Old Goa, located a short distance from the state capital. Once in a decade, the devotees multiplies manifold, when the church exposes the saint's remains in a glass-topped silver casket to devotees, in an event known as the "exposition". The last such exposition occurred in 2004.