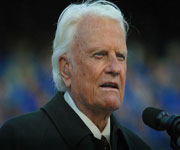 Regardless of how many Christians may have felt about the outcome of the 2012 election in United States, Rev.Billy Graham offered one admonition: pray for the nation's leaders. "The Bible urges us to do so with both respect and thanksgiving," America's beloved Evangelist Rev.Billy Graham wrote in a letter on the Billy Graham Evangelistic Association's website. He suggested that the nation's path to restoration won't come through any human leader, but through repentance.


"Repent therefore, and turn back, that your sins may be blotted out, that times of refreshing may come from the presence of the Lord," Rev. Graham quoted Acts 3:19-20. No human leader, he added, has the power to solve America's most fundamental problems.


Rev.Billy Graham, who turned 94th years on Wednesday, made it clear his work as an evangelist was not done. "I plan to spend the next 12 months, if God permits, doing all that I am able to do in helping to carry out a fresh vision God has given us-a vision to bring the Gospel of Jesus Christ to every possible place in America by the time of my 95th birthday," he said.


Graham's words were softer in tone than those of his son, Franklin, who bluntly said on CNN that the president's re-election put America on a "path of destruction." "We have God's blessing as a nation. Scripture is clear. God blesses countries, but God also brings bedlam when countries turn their back on him. If we don't obey his laws, He will withdraw his hand of protection," the younger Graham warned.