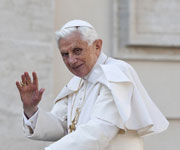 "No one is so poor that they can't give something" is the lesson that Pope Benedict XVI offered to pilgrims gathered in St. Peter's Square for the Angelus prayer, drawing it from the readings of the Sunday Mass. The generosity the Pope was speaking of is a consequence of faith, understood as "the inner attitude of those who base their lives on God, His Word, and trust wholly in Him."

Referring to the liturgy of the 32nd Sunday during the year (B) the Pope reflected on the figure of two widows, the widow of Zarephath of Sidon, in the First Book of Kings (17.10 to 16), and the widow who offers two small coins at the temple, in the episode narrated in the Gospel of Mark (12.41 to 44).


"Both of these women - explained the Pope - are very poor, and in this condition they have shown great faith in God. The first appears in the cycle of stories about the prophet Elijah. He, during a time of famine, receives an order from the Lord to go to Sidon, therefore, outside of Israel, to pagan territory. There he met a widow and asked her for some water to drink and a piece 'of bread. The woman replies that there is only a handful of flour and a drop of oil, but because the Prophet insisted and promised that, if she listens to him, the flour and oil will not be lacking, she grants his request and is rewarded.


The second widow of the Gospel is noted by Jesus in the temple of Jerusalem, in the treasury, where people give their offerings. Jesus sees this woman throwing two coins into the treasury; then he calls his disciples and explains that this payment is greater than that of the rich, because, while they give of their abundance, the widow offered 'everything she had, all she had to live' (Mk 12:44)."


"In ancient times - he continued - the condition of widows was in itself one of great need. For this reason, in the Bible, widows and orphans are people that God takes care of in a special way: they have lost earthly support, but God remains their Spouse, their Parent. Yet the Scripture says that the objective condition of being in need, in this case, being a widow, is not enough: God always asks our free acceptance of faith, which is expressed love for Him and others. Nobody is so poor that they can't donate something. Indeed both our widows today show their faith by undertaking an act of charity: one to the prophet and the other by alms. Thus they attest to the indissoluble unity between faith and charity, as well as between love of God and love of neighbor - as last Sunday's Gospel reminds us.


"The Pope Saint Leo the Great - he continued - whose liturgical feast we celebrated yesterday, says: 'The scales of divine justice do not weigh the amount of gifts, but the weight of hearts. The widow of the Gospel deposited into the treasury two small coins and surpassed all the gifts of the rich. No act of kindness is meaningless before God, no mercy is fruitless"


"The Virgin Mary- he concluded - is a perfect example of someone who gives herself completely trusting in God, with this faith she said to the angel "Here I am "and welcomed the Lord's will. Mary help each one of us, in this Year of faith, to strengthen our trust in God and in His Word. "