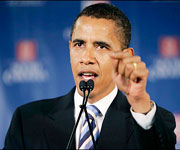 "For the United States, the best is yet to come": this was Barack Obama's message to his constituents in his victory speech in Chicago. The President of the United States-Barack Obama won his second term, conceded by challenger Mitt Romney, but economists are watching the future with concern. While the news of Obama's victory spread across the world, the Asian markets show little change, the stick markets in Tokyo, Seoul and Hong Kong remain almost immobile.


Market concerns are focused on the future and on the so-called "fiscal cliff", the tax cliff that America will face as of January 1st 2013. At the end of 2012 tax incentives established by the Bush era expire and the Government must increase taxes by 600 billion dollars. At the same time, Obama and Congress-dominated by his opponents-will have to find a solution for the US debt ceilings, which has reached dizzying figures, to avoid automatic cuts to spending.


Despite some positive signs in the past week, United States unemployment remains around 8% and it is thought that the future may bring an even harsher recession. The prospects are not encouraging for Asian economies, which rely heavily on export demand from the US and Europe.


On the other hand, Obama's victory has already led to some cultural changes: at the polls Maine and Maryland also approved marriage between persons of the same sex. So far the gay marriages were recognized in Massachusetts, Iowa, New York, Connecticut, New Hampshire, Vermont and the District of Columbia, but the result of a Supreme Court decision. The victory at the polls shows a profound change in the mentality of the US population. This year, Barack Obama became the first President to support this issue, changing the position he had taken in 2008.


According to some exit polls, three-quarters of those who want to vote on gay marriage are supporters of Barack Obama.