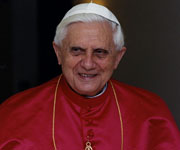 Pope Benedict XVI sent condolences to the victims of the November 07, 2012 earthquake that killed at least 50 people in Guatemala and offered prayers for the Central American nation. In message sent to the head of the Guatemalan Bishops' Conference, Bishop Rodolfo Valenzuela of Vera Paz, the Pope said he was "Deeply saddened to hear the painful news of the earthquake which has left many dead and injured, as well as immeasurable material damage in your beloved country."


According to the latest reports from the Country's President, Otto Perez – who traveled to the hardest hit region of San Marcos – 155 people have been wounded, 23 remain missing and more than 17,000 have been displaced. The president declared three days of mourning for the victims and said Guatemalans should resume their normal activities even though the country remains on red alert for possible aftershocks.


In his message, Pope Benedict offered to Guatemalans his "spiritual closeness to all citizens. I offer fervent prayers for the eternal repose of the victims and pray to the Almighty that He may grant consolation to those affected by this terrible disaster, and inspire in everyone sentiments of fraternal solidarity to face this adversity." "I also earnestly encourage the Christian communities, civil institutions and men and women of goodwill to lend their assistance to the victims, with generosity of spirit and willing charity," the Pope said.


He concluded his message invoking "the loving protection of Our Lady of the Rosary" and imparting the apostolic blessing "as a sign of affection to the beloved Guatemalan people, who are so present in my heart."