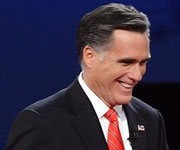 Exit polling following the United States presidential election has found that regular churchgoers voted for defeated Republican challenger Mitt Romney by wide margins. According to one exit poll released through CNN, 42 per cent of Protestant Christians voted for Barack Obama and 57 per cent for Romney. Among the nation's Catholics, 50 percent voted for Obama and 48 percent for Romney. The poll found that those who attended church regularly were more likely to vote for Romney than for Obama.


Among Catholic voters who said they regularly attend mass, 67 per cent voted for Romney compared to 32 per cent for Obama, representing a swing of 35 per cent in the direction of the Republicans since 2008. Romney also won white Catholics by a margin of 59 per cent to 40 per cent.


President of the Institute on Religion and Democracy, Mark Tooley, said: "Despite hopes for liberal inroads among church groups, especially evangelicals, it appears that evangelicals and traditional Catholics voted strongly along conservative lines. "Undoubtedly they were motivated at least partly by issues such as marriage, abortion and religious freedom, especially the HHS contraceptive mandate on religious groups.


"Whatever the reasons for the election's final result, it seemingly is not due to lack of active concern from tens of millions of evangelicals and traditional Catholics."